Come and join in the debate and discussion within the Conservative Party.

Have your say! Check out EVENTS

Posted by John Strafford at 5:30 PM No comments:

Rules of the 1922 Committee for the Election of the Leader.

Can the Rules be changed?

The Constitution of the Conservative Party states:

RULES FOR THE ELECTION OF THE LEADER

Clearly the rules can be changed so how?

Clause 3 of the Rules states:

So, as long as the Board is consulted the Executive of the 1922 Committee can change the Rules, e.g the Rules could be changed so that after a Leadership Election the "twelve months" as stated in clause 6 could be reduced to say "three months".

However there is one caveat to all this because under clause 17 of the Party Constitution it states:

17 The Board shall have power to do anything which in its opinion relates to the management and administration of the Party.

In other words, it can overturn whatever the Executive of the 1922 Committee decides.   That would lead to a serious clash, particularly if the 1922 committee had the support of the voluntary party and they were making the Party more democratic and it could be seen that ordinary Party members were getting more power.   In these circumstances the Party Board would be seen to be out of touch not only with the voluntary Party but also the Parliamentary Party.   The whole legitimacy of the Party Board would come into question. e.g. why is the Party Chairman and a Deputy Chairman appointed by the Leader and not elected by the members of the Party and accountable to them?   Is the Party Chairman just a spokesman for the Leader and not speaking in the interest of the whole party?

I am sure in this situation the Party Board would back down!

If the Executive of the 1922 Committee decide on a change to the Rules perhaps they might also consider puttin four candidates to the members of the Party and asking them to vote on a preferentialbasis with the first candidate getting over 50% of the vote becoming Leader.   This would cut out a lot of the vested interest votes when MPs are choosing which candidate to support. 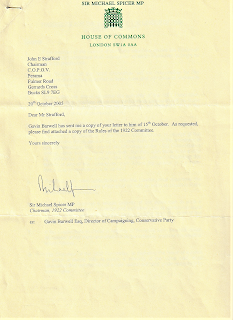 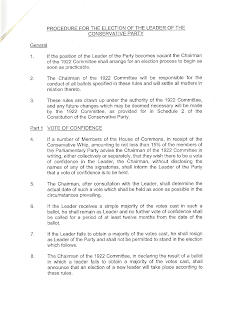 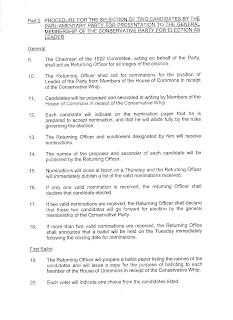 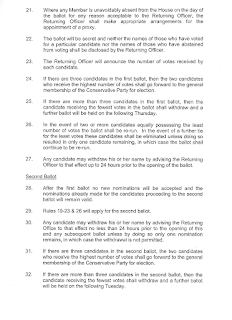 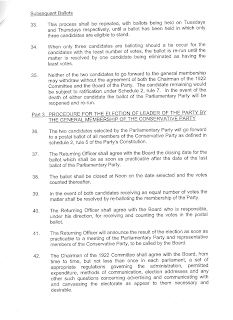 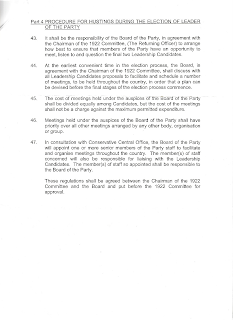 Posted by John Strafford at 8:05 PM No comments:

Watch this video to see how CCHQ took control of the selection of parliamentary candidates.

Posted by John Strafford at 5:39 PM No comments:

Watch this video to see how over the years democracy in the Tory Party has been eliminated and the consequent results.

Posted by John Strafford at 5:23 PM No comments:

Come and join us at the COPOV Forum and AGM on 9 April 2022.   For further details see Events

Posted by John Strafford at 12:36 PM No comments:

Do join us at the COPOV Forum. Lots to talk about.   For further information see Events

Posted by John Strafford at 12:42 PM No comments:

A Tsunami of Political Problems is Coming

A Tsunami of Political Problems is Coming.

A tsunami of political problems is surging towards the coast of the United Kingdom and Boris Johnson is sitting on the beach watching it come towards us!

Caroline Strafford sets out below some of the problems that need urgent action, in no particular order:

getting face to face appointments.

11                Allowing the UK to have a sensible power storage system and take gas from new field in North Sea and not be reliant on  other countries.

The Grass roots speak, but will Tory MPs listen?

LONDON, Jan 14 (Reuters) - British Prime Minister Boris Johnson is facing a revolt by grassroots Conservative supporters who want him to resign after a series of revelations about parties held at his official Downing Street residence during national coronavirus lockdowns.

From the West Midlands to Scotland, party members - who raise funds and rally voters at election time - are turning against a man many of them had admired for his exuberance, unstuffy if sometimes messy style and his championing of Brexit.

John Strafford, 80, chairman of the Campaign for Conservative Democracy, called Johnson the worst prime minister of his lifetime and said the allegations about him attending parties during the worst health crisis in a century showed him to be reckless and irresponsible.

"People are absolutely disgusted by it. It is a sign of the arrogance of the man. The reality is that Boris is a court jester who wants to be king," he told Reuters.

"His greatest failure is that he has no judgment, and judgment is the most important quality for any politician."

Johnson was once the darling of the party's grassroots members who helped secure him a landslide victory in a 2019 election, allowing him to deliver on promises to finally steer Britain out of the European Union. They also applauded last year's rapid rollout of COVID-19 vaccines under his leadership.

But the relationship is rapidly souring under the impact of a steady stream of revelations about Downing Street's apparent flouting of strict lockdown rules.

In the latest twist, one guaranteed to upset Conservative supporters, Johnson's office on Friday had to apologise to Queen Elizabeth after it emerged that staff had partied in Downing Street on the eve of Prince Philip's funeral last year, at a time when mixing indoors was banned. read more

Johnson himself was not present at those parties. However, he apologised to parliament on Wednesday for joining a gathering in the Downing Street garden on May 20, 2020, when Britain was under a strict lockdown.

While grassroots Conservative members cannot oust a leader, their views influence lawmakers and they do vote on which of the final two candidates wins the party's top job in a leadership election.

A senior government official, Sue Gray, is currently investigating the claims about parties held in government buildings during the lockdowns. Her report is expected in the next few weeks.

Johnson's supporters hope the report will stop short of saying whether he knowingly broke any rules or should resign.

But Strafford said that regardless of the report's findings many rank-and-file members had already made up their minds.

He said his group of Conservatives passed a symbolic vote of no-confidence in Johnson last month - before the latest damaging revelations - and his WhatsApp was inundated with messages from party members saying they no longer support the prime minister.

"The only reason they are not resigning their membership is because they want to vote in the leadership election, which is now inevitable," added Strafford.

In the Conservative stronghold of Sutton Coldfield in the West Midlands, the local party association passed a motion on Thursday calling for Johnson to stand down.

Posted by John Strafford at 7:09 PM No comments:

"Re candidate selection- I believe in fixed term four yearly general elections at the beginning of May. All candidates to.be selected the previous January by one member one vote postal ballot with Alternative Vote, the shortlist consisting of anyone who can get a proposer and seconder from the local party members. Each member would be sent a ballot paper and another piece of paper with a maximum 100-word election address from each prospective candidate. Bye- election candidates to be selected in the same way as far as possible.

For the party leadership- annual election every July. 10% of MPs to nominate each candidate. Postal ballot of all members - if nobody gets over 50% a runoff among MPs between the top two. The leader nominates their deputy and makes all other appointments subject to confirmation by MPs. If the leadership falls vacant during the year, the deputy leader takes over."

Comment by John Strafford:  Interesting proposal, although postal ballots are too expensive at a local level.   The internet could be used instead.

Posted by John Strafford at 5:13 PM No comments:

At the COPOV Forum on 11th December attendance was 28 with representatives from nine Constituency Associations.   The following votes were taken:

1) Should vaccinations for COVID19 be made compulsory?

Only one person was in favour.

2) Should vaccination passports be introduced and used for entry into different venues?.

The vote on this was 7 in favour and 11 against, others abstaining.

A clear majority thought that he should resign now.

At the COPOV Forum meeting held on the 25th September the following motion was passed unanimously:

Posted by John Strafford at 7:27 PM No comments: