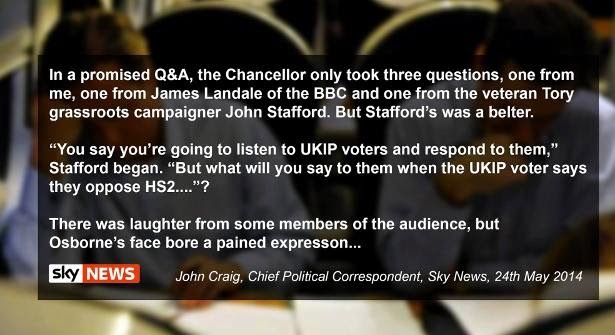 View below to see full question:

And these were some of the responses:


The blunt warning came as activists met to discuss how the party might cling to power.
MP Adam Afriyie – once tipped as a leadership challenger to Mr Cameron – said: “Many of our core supporters feel alienated and disillusioned.”
In a swipe at the PM’s time in public relations, he added: “Politicians need to come down from their ivory towers and talk to real people – I mean really talk to them, and really listen to them – not engage in some form of artificial listening PR stunt.”
Fellow Tory MP Robert Halfon urged the PM to hold public meetings to find out why voters were unhappy. He said the Tories, unlike Labour, did not have a “moral mission”.
He said: “When they (Labour) knock on a door everyone knows what they’re about. They know instinctively you’re there to help people who are less well off. What is our message?”


Activist John Strafford said Tory voters had defected to Nigel Farage’s UKIP over immigration, adding: “Unless we take action on them they are going to stay with UKIP and not come back.”
Mail on Sunday
www.dailymail.co.uk/news/article-2638383/No-secret-pacts.

In my many years I have come to a conclusion that one useless man is a shame, two is a law firm and three or more is a government.
John Adams
Suppose you were an idiot. And suppose you were a member of government…..... But then I repeat myself.
Mark Twain

A government which robs Peter to pay Paul can always depend on the support of Paul.
George Bernard Shaw
Foreign aid might be defined as a transfer of money from poor people in rich countries to rich people in poor countries.
Douglas Casey, Classmate of Bill Clinton at Georgetown University
I contend that for a nation to try to tax itself into prosperity is like a man standing in a bucket and trying to lift himself up by the handle.
Winston Churchill
Giving money and power to government is like giving whiskey and car keys to teenage boys.
P.J. O'Rourke, Civil Libertarian

If you don't read the newspaper you are uninformed, if you do read the newspaper you are misinformed.
Mark Twain
In general, the art of government consists of taking as much money as possible from one party of the citizens to give to the other.
Voltaire (1764)
Talk is cheap………...except when government does it.
Anonymous
The only difference between a tax man and a taxidermist is that the taxidermist leaves the skin.
Mark Twain
We hang the petty thieves and appoint the great ones to public office.
Aesop
Posted by John Strafford at 12:44 PM No comments:

Show our love for Scotland