Do come to the COPOV Barbecue on August 13th in Beaconsfield. Details are shown under "Events" on right hand side.
Posted by John Strafford at 4:05 PM No comments:

The Biggest Stitch up since the Bayeux tapestry?

Listen to "The World Tonight" from ten minutes in.

Once again it appears that the Parliamentary Party have shafted the ordinary members. Democracy denied is democracy distorted. This whole system of electing a Leader is wrong. All candidates should have been put to the membership and they would vote on a preferential basis and the first candidate to get 50% would be elected. This way no one would ever know how many MPs supported which candidate.
Posted by John Strafford at 4:41 PM No comments:

Party Chairman and the Party Review.

Lord Feldman, the Chairman of the Conservative Party has announced that he will be stepping down as Chairman when David Cameron leaves Downing Street.   Cameron will go on 9th September, so we can expect a new party Chairman then.   Liam Fox has called for the Party Chairman to be directly elected by Party members.
In the circumstances the Party Review should be put on hold so that a much more fundamental review can be carried out.
On 22nd April I wrote to Lord Feldman about the review a follows:


At a meeting of the Campaign for Conservative Democracy held on 16th April the Party Review was discussed at some length.   I was asked to put the following questions to you:


1)      Some of the changes proposed will require alterations to the Party’s Constitution.   Will the changes be made in accordance with the Constitution or will some other process be adopted?


2)      Will there be any point in the process when ordinary members can propose amendments to any changes proposed or propose changes in their own right?


3)      The Review states on page 17: “The Membership Department, in consultation with senior volunteers will be able to award a finite number of Gold memberships to activists who have given outstanding service to the Party…….”   Will these awards be for life or for a finite period?


5)      What is the proposed democratic structure of the proposed MCAs? Will the Officers be elected by all the members of the Constituencies comprising the MCA?


7)      Who and by what process will the delegates? to the National Convention be decided by the MCA (page 39)?


One final point: the Spring National Convention is normally the meeting at which Officers of the Convention are elected.   This did not happen this year so unless there is an early meeting of the Convention there will be a clear breach of the Party Constitution.   What is the position on this?


I look forward to hearing from you. 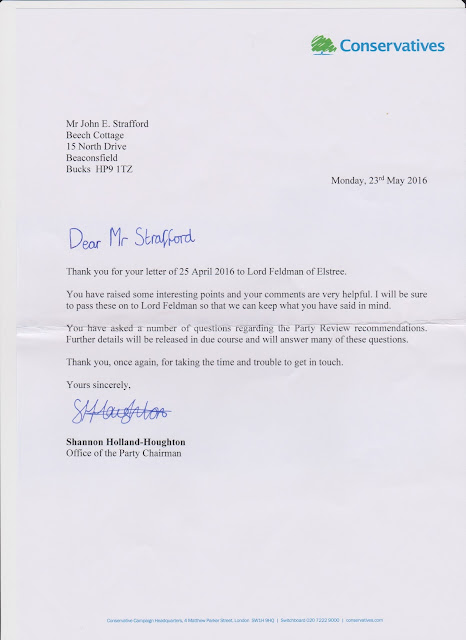 So, once again questions unanswered.   Just pushes them into the long grass.  Another exaample of contempt for the grass roots!

Posted by John Strafford at 4:25 PM No comments:

What may happen in the Leadership election.

Listen to the World Tonight from 13 minutes 30 seconds in
Posted by John Strafford at 4:38 PM 1 comment: